Malaika Arora Khan’s hot number “Munni Badnaam” from Salman Khan’s box-office smash Dabangg has entered the Guinness Book of World Records! The sultry item number was a hit with fans and helped create a lot of buzz about the flick.

In Dabangg, Salman plays police officer Chulbul Pandey, who is described as “fearless, corrupt, lovable and a bad-ass Robin Hood.” The action movie is set in Uttar Pradesh and tells the story of Chulbul Pandey, a corrupt police inspector.

But how did it enter the Guinness Book of World Records? Well Malaika went to Melbourne in Australia where Indian Film Festival 2011 director Mitu Bhowmick Lange gathered 1200 people who danced to the track for three whole minutes! Considering the dance friendly beats of the tune, we are not surprised! Do you agree? 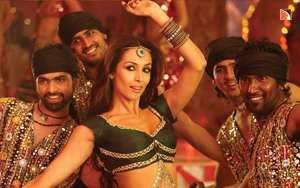