Home / Gossip / Kareena Kapoor Khan Gets Called ‘Dumb’ By Netizens For Her ‘If There Would Be No Films…’ Statement, A User Said, “She Is Quite Arrogant & Stupid…” 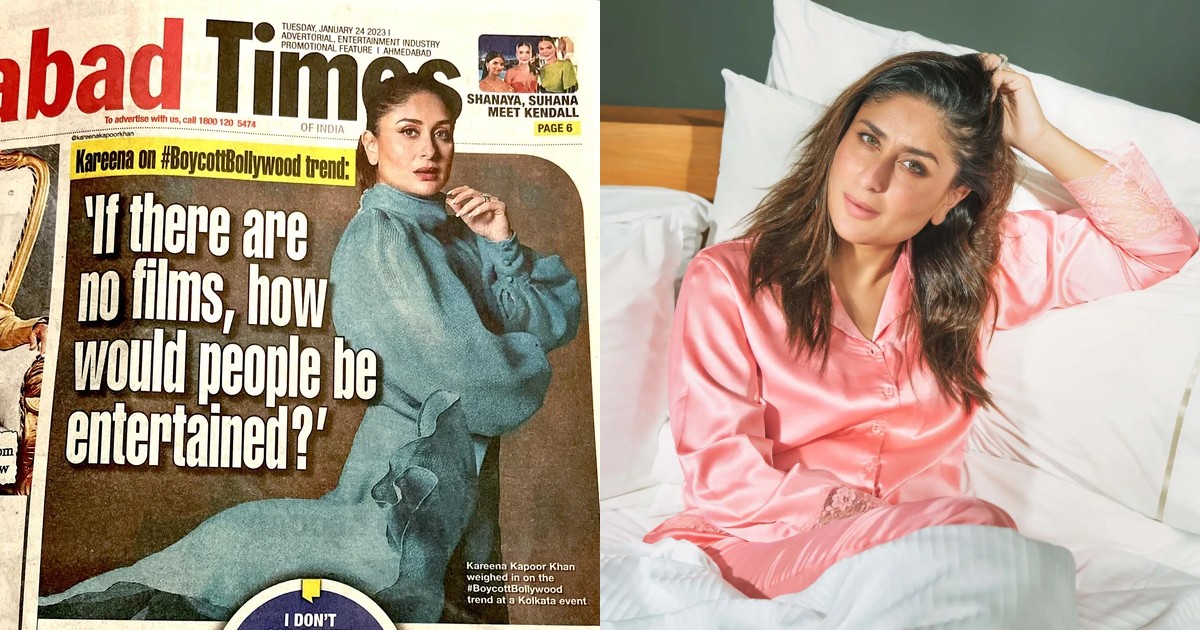 Kareena Kapoor Khan aka bebo is one of the most loved and respected Bollywood actors. She is an amazing actor, a loving wife and a doting mother. Be it for her fashion choices or for her unapologetic statements, Bebo never misses a chance to grab eyeballs.

The 3 Idiots actress is known for making bold choices and speaking out her mind. A lot of times, people find it rude but Kareena doesn’t give up her sassy attitude. The actress recently attended an event and reacted to the rising Boycott Bollywood Trend. In the past, the industry has faced the wrath of the boycott trend that allegedly began after the death of Sushant Singh Rajput. Scroll down to read what exactly Kareena said at the event and how netizens are reacting to her statement.

Kareena Kapoor Khan recently attended the Indian Chamber of Commerce – Young Leaders Forum in Kolkata and shared her point of view on the boycott Bollywood trend said, “I don’t agree with it at all. If that happens, how will we entertain, how will you have the joy and happiness in your life, which I think everybody needs. And which cinema and films are promising, which we have always done, which films have always done. Agar films nahi hogi toh entertainment kaisa hoga.”

RRR Fans Take A Dig At The Kashmir Files Director Vivek Agnihotri As SS Rajmouli’s Film Bags Oscar Nomination: “Now They Will Say ‘It Is An International Conspiracy”

As soon Kareena Kapoor Khan‘s statement reached Reddit, netizens left hilarious comments and revealed war better ways of getting entertained according to them. The comments will surely tickle your funny bones. One of the users wrote, “Mumbai local lafda is more entertaining.”

Another user wrote, “You can watch Youtube, scroll reddit, Twitter, watch Netflix and you won’t notice months have gone by. Do you think we live in pre 90s era.”

Another user wrote, ” This is such a dumb statement and it shows how disconnected these new breed of Bollywood stars are. This may have been true in 80s or 90s but to say this in 2023 ??????

Another was quick to react and wrote, “Kareena is quite arrogant and stupid. I don’t know why people go to watch her.”

For the unversed, the hashtag Boycott Bollywood started trending in the year 2020 after the untimely demise of Sushant Singh Rajput. However, the hashtag reignited in the year 2022 and before the release of many films including Kareena Kapoor Khan starrer Laal Singh Chaddha.

What are your thoughts on Kareena Kapoor Khan’s statement? Let us know in the comments section below.

Must Read: Fardeen Khan Once Accused Shahid Kapoor Of Creating Issues Over His Intimate Scenes With Kareena Kapoor Khan: “He Was Bitching About Me…”

The post Kareena Kapoor Khan Gets Called ‘Dumb’ By Netizens For Her ‘If There Would Be No Films…’ Statement, A User Said, “She Is Quite Arrogant & Stupid…” appeared first on Koimoi.